How to get from the sea

Whether coming from the East, the North or the West, the first sign of the powerful lighthouse that we can see at night as we approach the port of Cabo de Peñas.

Coming from the West, navigation from the Cabo de Peñas to the Port of El Musel, by day does not present any difficulty; It is enough to maintain a true course 123º until reaching the buoy more north of the four that mark the lows of the Amosucas. From this buoy we will set a True Course of 203º that will take us directly to the breakwater and after a half mile journey, to starboard we have the new facilities of Yates Marina del Principado.

The final point of the route is clearly defined by a group of 5 flags located on the dike, which happens a few meters later a solitary who clearly show us the turning point and access to the marina. 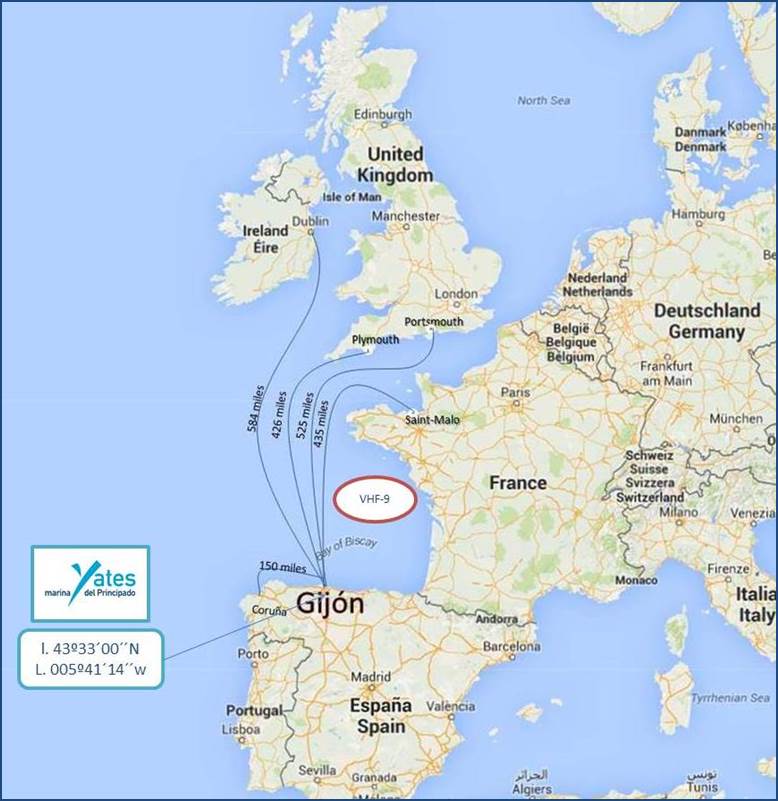 Lorem ipsum dolor sit amet, consectetur adipiscing elit, sed do eiusmod tempor incididunt ut labore et dolore magna aliqua.
In a nocturnal embassy the difficulties are always greater, even for seasoned sailors, given the profusion of lights that are seen on land and that point some fishing ports between Cabo Peñas and El Musel, just on this port is located Cabo Torres And at a height of 82 meters above sea level we have a headlamp that emits F1 2 (10) and whose reach is 18 miles. The distance from the Cabo Peñas to the Port of Musel where the marina of Marina del Principados Yates is situated is of scarce 10 miles by which it is tilted to the True Right 123 ° until we find by our bow, perhaps a little open by the amura Port or starboard, and safely, the light of a buoy emitting Q (1) and having a range of 5 miles. This buoy is the most located north of a set of 4 cardinal markings that signify a set of bass called the Amosucas. Given the depth of these lows 20 m. There is no danger to sports navigation. If from this buoy we set True Course of 203 °, we will see the light that shows us the northern tip of the breakwater of the Osa dike, which is at a distance of 1.7 miles and emitting Q (3) 10 sec. Once reached the mentioned light, following a True 216th Road that will take us parallel to the said breakwater, half a mile we will be next to the green light F1 (4) 20 sec. That indicates to us that bordering it by starboard we accede to the berths of Yates Marina of the Principality.

Recalada coming from the East and day is recommended to do a point located no less than half a mile north of Cabo San Lorenzo, Cabo that does not have any system of location by light. From this and following a True Route 265 ° after sailing for 2 miles we will find on the La Moral Rock, located at 7.5 Cables to the North of the Peninsula of Santa Catalina, reached this point, a True Straight 245 ° will take us to the North end Of the Breakwater of the Dike de la Osa. Navigating half a mile parallel to the aforementioned breakwater, or the same to the True 216th Road, on the starboard will appear the facilities of the New Yacht Marina Marina Del Principado.

If the arrival occurs during the day, and the draft of the boat is not excessive, from this point of the Rock La Moral we can carry a 234 ° True Course that will take us directly to the entrance of the Marina. If this defeat continues, the minimum depths in low tide will never be less than 3.3 meters in the lower Canto de San Pedro and 3.7 meters in the Piedra de San Justo.
The turning point to starboard to access said facilities is clearly determined a few meters earlier by a group of 5 flags located on the wall of the breakwater, followed by a solitary just at the end of it.

The arrival of the day from the East shows some difficulty in identifying the facilities for those who do not know them, because from the sea only an apparently uninterrupted line of concrete blocks and stones is visible. The approximation looking for the indicated marks will show us that appearances sometimes deceive.

The arrival from the East during the night presents some difficulties due to the absence of lights identifying land points, so it is recommended to give a wide shelter to Cabo San Lorenzo (not less than a mile, unless it is equipped with radar ). From here and following a true course of 250 °, after two miles of navigation we will find on the Rock the Moral, from where following a true Straight of 245 °, after traveling 8 wires will be next to the lamp that emits Q (3 ) 10 sec. And that will take us parallel to the breakwaters until after half a mile we are next to a green light that emits F1 (4) 20 sec. That shows us the turning point to starboard bordering it that will place us in the facilities of Yates Marina del Principado.

From the north to the port of El Musel, made during the day, it is possible to quickly identify Cabo Torres with its lighthouse and the facilities of the Port of Musel, as well as buildings of a certain entity that indicate a city of some importance. However, the distinctive feature that all seafarers coming from the North and arriving in Gijón can clearly appreciate is a cloud or ascending column formed by dust and smoke that perfectly defines any city with its own life and its inherent pollution.

If we arrive during the night from the North, opened by starboard, you will be able to appreciate perfectly the sparkles that Cabo Peñas emits f1 (3) 15 sec. At a very significant distance (if the night is clear you can see well over the 35 miles indicated in the book of lighthouses and nautical charts); For, shortly after beginning to glimpse more closely towards the Cape Torres f1 (2) 10 sec. However, and once again, as a distinctive characteristic of a city, it will be possible to contemplate a great glow that often serves as a guide for seafarers around the world.

How to get from the air 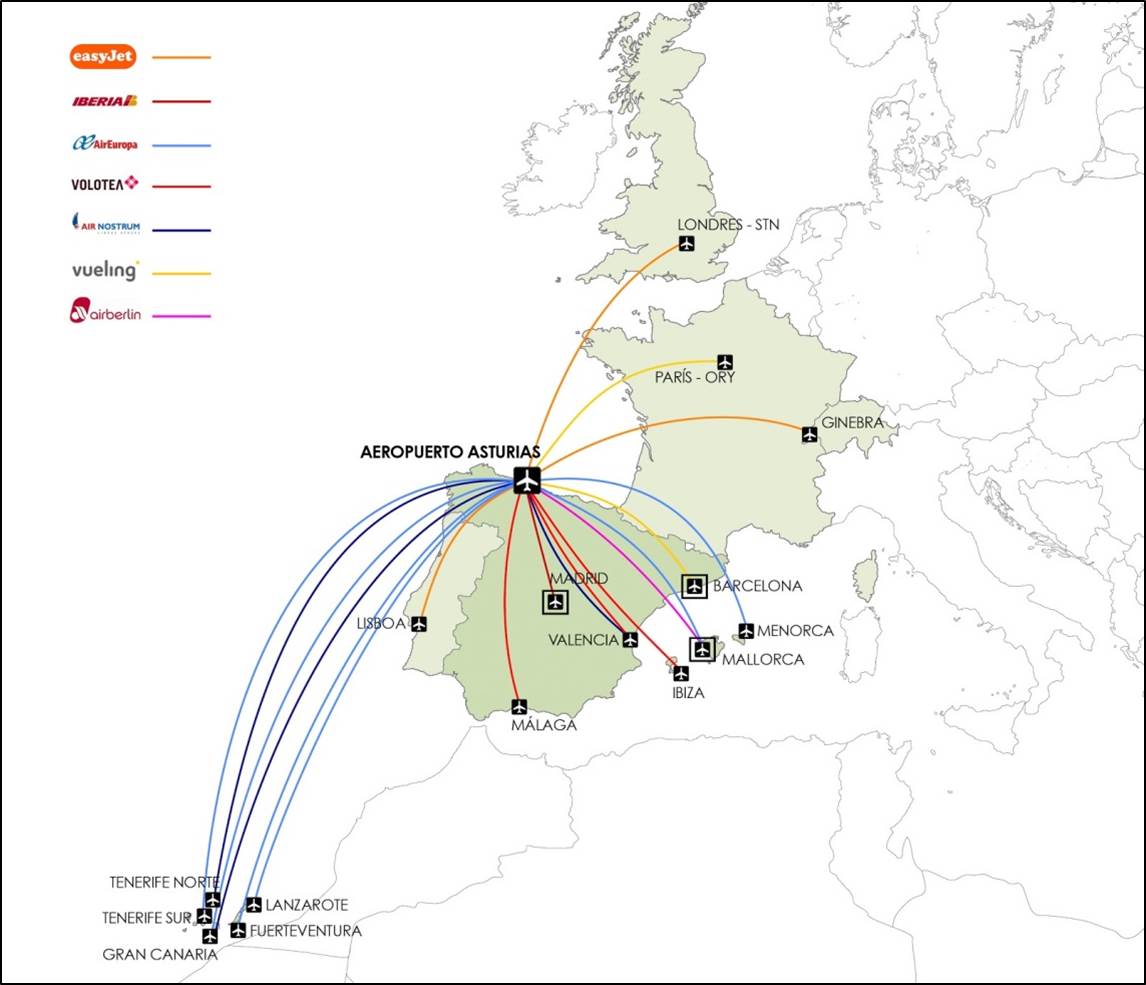 Connection to the airport 35 Km.

How to get by land

A few meters from the center of Gijón with easy access by motorway to the city from other nearby cities.
From the A-66, near Gijón, use the 2 lanes to take the exit 384 towards GJ-81 in the direction of AS-19 / Gijón City center / N-641 / El Musel / Puerto
Use the right lane to take the Avda. Principe de Asturias ramp towards N-641 / El Musel
At the roundabout, take the second exit towards Polígono Puerto Musel.